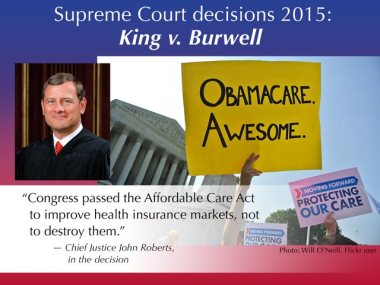 The Supreme Court’s 2015 spring term will go down in history. In the last few days of June, the Court released a flurry of decisions that will affect the lives of millions of Americans.

One long-awaited decision concerned the case of King v. Burwell. This case centered on the Affordable Care Act, or ACA, passed by Congress in 2010. The more common nickname for this law is “Obamacare.” This package of laws was meant to provide all Americans with some kind of healthcare coverage, though 35 million people are still uninsured. Still, the ACA has provided millions more people with health insurance by expanding Medicaid coverage for poor people. It also provides financial help, or subsidies, to many lower- and middle-income families so that they could afford health insurance.

Over the last several years, Republicans in Congress have tried more than 50 times to repeal the Affordable Care Act. These Republicans say that the ACA will lead to higher taxes. Others say they are doing it for political reasons. In any case, Obamacare opponents weren’t successful in repealing the law in Congress, so they launched lawsuits against the act. King v. Burwell hoped to stop subsidies, or financial help, to more than six million Americans who get their insurance through federal rather than state exchanges. This would have led to the collapse of the ACA. However, the Supreme Court argued that Congress meant for the ACA to thrive, not fail. For this reason, six of the nine justices voted to interpret the law in a way that keeps Obamacare alive. 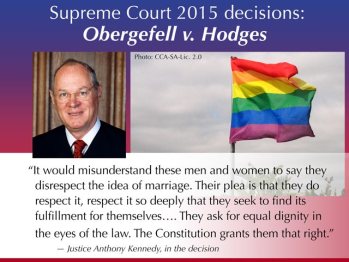 The Supreme Court handed down a historic decision in the case of Obergefell v. Hodges. This case was about same-sex marriage. More and more states have made it legal for gay people to marry. But some states still had bans on same-sex marriage. Jim Obergefell and his partner John Arthur lived in Ohio, where gay marriage is illegal. They traveled to Maryland and were legally married there. Soon after they returned to Ohio, Arthur died from ALS. Obergefell wanted to be listed as the surviving spouse on his husband’s death certificate. This would have happened if they were a man and a woman, but the state of Ohio did not want to recognize their marriage. In his suit, Obergefell argued that gay Americans should have the same marriage rights as everyone else in all U.S. states.

On Friday, June 26th, many people across the U.S. were eagerly awaiting this decision. In a 5-4 vote, the Court ruled that no states can refuse to marry same-sex couples, based on the 14th Amendment guarantee of equal rights for all citizens. The decision also means that states have to recognize legal same-sex marriages that are performed elsewhere. Justice Anthony Kennedy, usually considered a “swing vote” on the court, wrote the decision. In this decision, he said

It would misunderstand these men and women to say they disrespect the idea of marriage. Their plea is that they do respect it, respect it so deeply that they seek to find its fulfillment for themselves. … They ask for equal dignity in the eyes of the law. The Constitution grants them that right.

What do you think about these decisions? Did the Supreme Court do the right thing? Add your voice in the comments!