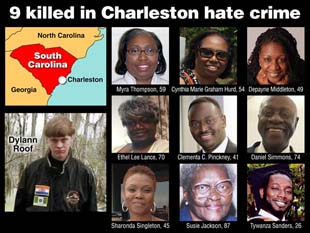 The world is in mourning after the horrific murders of nine innocent people in Charleston, South Carolina. On June 17th, a 21-year-old white supremacist shot and killed nine African Americans at Charleston’s historic Emanuel African Methodist Episcopal Church. The victims ranged in age from 27 to 87, and included Reverend Clementa Pinckney, a member of the South Carolina State Senate. Six of the nine victims were women.

The gunman, Dylann Roof, apparently walked into Emanuel’s weekly Wednesday night prayer group and asked to sit next to Rev. Pinckney. According to survivors, he sat with the group for nearly an hour. Then he took out his gun, made racist statements, and started shooting. One report says the shooter made sure one person was left alive to tell the story. After the shooting, Roof managed to get out of South Carolina, but he was later arrested in North Carolina. He told police he almost didn’t go ahead with the shooting because the people had been so kind to him.

Citizen journalists found Roof’s webpage, which is full of racist statements, including a statement that he wanted to start another civil war. There were also pictures of Roof with the Confederate flag, and one showing him burning the American flag. In one picture, he wears a jacket with the flags of Rhodesia and apartheid-era South Africa, two African states that were dominated by whites for many years.

Many are trying to understand the dangerous racism underlying this crime. But instead of dividing people, the crime has brought people together in Charleston and across the country. 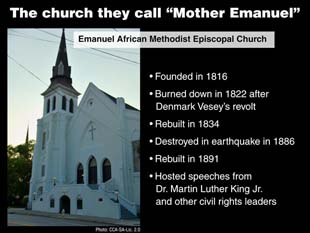 The Emanuel AME Church has a long history in the struggle for equal rights for African Americans. Founded in 1816, it is one of the oldest and most respected churches in the South. The church was founded by a group of African American worshipers who split away from the local Methodist Episcopal Church because of racism. They built their own church, and their numbers grew quickly. Emanuel also quickly grew in status among black worshipers; even today, it is called “Mother Emanuel.”
Soon after it was built, Emanuel was thrust into controversy. One of the church’s preachers, Denmark Vesey, was a free man of color who tried to organize a rebellion of enslaved black people. After Vesey and many others were arrested and hanged in 1822, local white supremacists burned the church to the ground as a lesson for anyone else who might try to break free of slavery. Members rebuilt the church in 1834, but they were not allowed to meet there because of laws that banned all-black services. In 1886, after the war was over, an earthquake flattened the church. Members rebuilt the church—for the second time—at its present location in 1891.

Over the last 124 years, the Emanuel AME Church has been an important source of strength for its community. It has welcomed many famous African American speakers and civil rights leaders, including Booker T. Washington and Dr. Martin Luther King. In 1969, Coretta Scott King led a march to the church to support striking workers. One professor of southern history remarked, “It’s not just a church…it’s also a symbol of black freedom.” 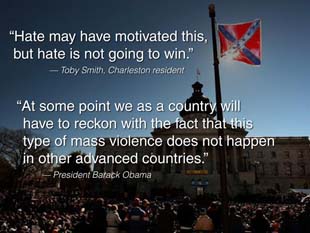 As the news of this shooting swept across the U.S., there were many different reactions. It has been an extremely painful time for the Emanuel AME community, and for the people of Charleston who knew and admired the victims. Many of the victims’ family members say their religious beliefs have led them to forgive the murderer. Charleston resident Toby Smith spoke for many others in saying, “Hate may have motivated this, but hate is not going to win.”
Others are angry. These people say that this latest crime is a reminder that the U.S. has never gotten over the Civil War. One of the biggest pieces of evidence for this is the Confederate Battle flag, which still flies on the grounds of the South Carolina State House. Protesters have called this flag a symbol of slavery and racial mistreatment, and have demanded that South Carolina take it down. Supporters of the flag say it is part of South Carolina’s history and honors those who from the South who died in the Civil War.

Last week, the governor of South Carolina, Nikki Haley, changed her position and called for the flag to come down. A Republican state senator in South Carolina is introducing a bill to remove it from the statehouse grounds. And on Saturday, June 27, a woman named Bree Newsome took matters in her own hands, scaling the flagpole at the South Carolina capitol to take the flag down herself.
Meanwhile, of the biggest flag manufacturers in the country said it will stop making Confederate flags. Some major retailers, including Wal-Mart and Amazon, said they will stop selling it.

The murders have also led to a new national discussion about the Second Amendment and gun rights. President Obama noted that this is the 14th time during his presidency that he has had to address the nation after a mass shooting. In a speech he gave after the Charleston murders, he said: “At some point we as a country will have to reckon with the fact that this type of mass violence does not happen in other advanced countries.”

Do you think the Confederate Flag should continue to fly outside of government buildings? What do you think the flag represents? Does this incident indicate the need for stricter gun control? Why or why not?

Originally posted on Read to Know, a publication of NewsCurrents/Knowledge Unlimited.